Now that you think you’ve solved our brain teasers, it’s time to check your answers. Maybe you got them all correct. Maybe you were stumped on one of them…but surely not all of them. Whatever the case may be,
we know you enjoyed taking your mental break. 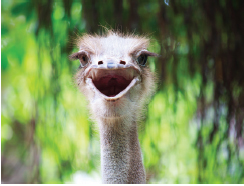 An eccentric ostrich rancher claims that an enclosure made from four of his straight fence sections is just large enough to display one of his ostriches with relative comfort for the bird.   One day he decides to take fifteen ostriches to the county fair.  Given the required amount of space that he has determined for each bird, what is the minimum number of these identical fence sections that he can use to contain the fifteen birds while at the fair?

He needs only 14 of the fence sections to build the enclosure.

The maximum area for a polygon of any size is the “regular” polygon of that size. “Regular” meaning a polygon with the same incident angle between all sides (i.e. a hexagon, an octagon, a decagon, etc). To calculate the area of a regular polygon, use the formula: Area = (Circumference x length of the apothem) ÷ 2, where the apothem is a line segment that joins a regular polygon’s center to the midpoint of any side (and which is therefore perpendicular to that side).

The apothem of a 14 sided regular polygon (with sides of length 1 unit) is 2.19 units. Therefore the area of the 14-sided-polygon is 15.33 square units, and thus the rancher can use 14 fence sections to enclose his 15 ostriches so that each ostriches will have one square “fence section” of space inside the enclosure.

There is a way to fold a piece of paper (or cloth) so that a single straight cut will produce a five pointed star.  Can you figure out this fold-and-cut technique for yourself (no Googling)?    And a bonus trivia question:

This technique is commonly attributed to a famous American seamstress – any idea who that might have been?

Google it – There are lots of YouTube videos that also show the solution – here’s one. There is even a theorem that states that every pattern (plane graph) of straight-line cuts can be made by folding and one complete straight cut. To read more, click here.

And the common attribution for the five pointed star technique is to Betsy Ross (although it may or may not be true). While she only needed to cut 13 stars for the first American flag, flag seamstresses throughout the years have probably appreciated the technique even more! If you try to fill up the remaining boxes in the grid above* with additional copies of the letters A, B, C, D, E, and F, without having any two of each letter in the same row OR column OR on a diagonal with another, you may become frustrated – because it is not possible.  But how many of those letters CAN you place according to the constraints given?

It’s believed that the minimum number of unfilled squares would be four. One such solution is shown below.