Creating an accurate software simulation for a complex system can be difficult, but there are many reasons to do it. Creating simulations of automated equipment, processes, and robot sequences is a great way to validate controller programming, test hardware settings, and check HMI configurations—all without cycling the actual equipment.  There can be many advantages to simulation, from verifying equipment feasibility to confirming fault logic and generating tested controller code in less time.

Whether the equipment is available, is in development or it doesn’t exist yet—simulation can reduce design time, increase performance and ensure a smooth and quick startup. Several advantages are listed in Table 1. A maker of hydraulic press brakes and shears used in sheet metal fabrication, Accurpress America in Rapid City, SD, uses simulation software to sort out complex machines. In the Control Design, January 2015, Cover story “Simulation Saves Time and Money”, Allen Guernsey, machine control development specialist at Accurpress, explains the complexity of their machines. “Our current version of the PLC for the press brakes can handle 28 axes, and we can link machines together to work in tandem.” “Sometimes the press brakes and shears are parts of cells, and in these cases other machines arrive at the customer from different factories, so simulation is the only way to run the machines together prior to startup,” he adds in the article.

The use of simulation has reduced their startup and test time. “Being able to watch machine movement in a simulated environment has enabled better PLC code because, in simulations, more fail safes can be tested without risking machine crashes,” explains Guernsey in the article. “For example, I can simulate hydraulic cylinder characteristics, introducing errors such as a stuck cylinder. So far, I have not run into anything that I could not simulate.”

In the cover story, Dave Perkon, vice president of advanced technology at AeroSpec, a machine builder in Chandler, AZ, also uses simulation software. “Most of the top robot suppliers have simulation software,” he says. AeroSpec is a custom machine builder of a variety of discrete manufacturing equipment ranging from lean manual assembly stations to high-speed fully automated assembly equipment. 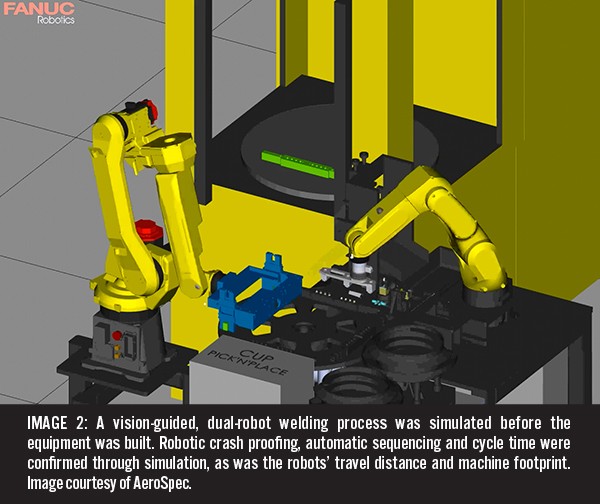 “During the concept and quoting stage, simulation software helps keep a project moving in the right direction and keeps the customer engaged as their requirements come to life,” notes Perkon in the article. “If the actual equipment doesn’t meet the simulation results, it indicates the program needs more work.”

Simulations are useful during the quoting stages, but the same simulation can also create usable code. “Although there are configuration differences, the end product from many of these simulation packages are directly downloadable software programming to the robot,” Perkon explains in the article.

OEMs of process skids can also benefit from using simulation.

Malisko Engineering, a systems integrator in St. Louis, MO, uses simulation to improve control and save time in its process control projects. In the cover story, Tim Malyszko, director of operations, explains: “At Calumet Specialty Chemicals in Louisiana, MO, we automated a manual operation. A mass balance and simple energy balance was written in a simulated environment so  operations could run the system in an off-line environment to identify control gaps. The simulation allowed us to do a thorough checkout during FAT (Factory Acceptance Testing), thus reducing commissioning time.”

Simulations are used by Sandia Laboratories to test diesel engine systems ahead of time. Before running a test on the actual equipment, the engineers at Sandia can run the simulation to confirm how the system will react to different fuels. These simulations can help reduce wear on expensive equipment and save time.
For more, see the sidebar,  “Sandia Simulates”.

While simulation can verify if the solution will perform as expected, before testing on the actual equipment, it’s not without its problems as listed in Table 2. OEMs and system integrators, who face these challenges on a regular basis, elaborate further in the following section. Simulation packages can be difficult to master, as Tim Malyszko of Malisko Engineering points out in the article. “One of the most common challenges I’ve come across with various simulation packages is the simulation shutting down if there are any errors. In other words, if a simulated device points to a tag that does not exist in the physical or simulated controller, the whole simulation dies.”

And simulations aren’t always completely accurate. “There have been times when our actual robotic equipment did not meet the simulated robot cycle time,” notes Dave Perkon, of AeroSpec, in the article. “Adjustments to the robot motion profile, and adjusting approach and departure motion profiles, are usually required in the real world. Simulation doesn’t perfectly duplicate the real world.”

Simulations are becoming an important part of control system design and development. Due to its value early in the design process and during testing, robot and control hardware suppliers are adding simulation functionality into their products. Simulations offer many benefits and are a valuable tool for machine, robot and process skid design.

However, simulation is not always easy. It takes time to set up a simulation mimicking actual operations, as careful attention to details and functionality are required to match the actual equipment or process and make the results useful.

Although difficult, the benefits of simulation offset the challenges in robotic, motion control, process and discrete applications—especially during equipment design and deployment, and where testing opportunities on live equipment isn’t possible, safe or readily available. [hozbreak]

At its Alternative Fuels Laboratory located at the Combustion Research Facility in Livermore, CA, Sandia National Laboratories studies the effects of various fuels used in diesel engines. Combustion of many different fuel types is analyzed, and tuning the fuel control and monitoring system to account for differences in fuel viscosity and compressibility was too time consuming, so Sandia decided to use offline simulation. The R&D laboratory support technologist, Samuel Fairbanks, now simulates before test, allowing him to make tuning changes in advance. “Simulating the operation of our high-pressure fuel system using MathCAD allows me to verify hardware requirements for mechanical design of our high pressure fuel system,” says Fairbanks in the Control Design January 2015 Cover story “Simulation Saves Time and Money”. “It also aids in tuning the system for different fuels by allowing me to adjust PID coefficients in the model, making it possible to get very close to the actual values needed. Being able to tune the system more quickly also reduces component wear, which is accelerated at high pressures.”

The two diaphragm pumps in the high-pressure fuel system are each driven by a hydraulic cylinder. The two cylinders are controlled using feedback from SSI position transducers using a Delta Computer Systems control system with dual-axis and other I/O modules. The control system modulates hydraulic flow to the cylinders via proportional control valves.

Each pump has a cascaded PID control loop controlling the fuel pressure by adjusting the speed of the hydraulic cylinder stroke. The PID control loop also keeps oil pressure in the diaphragm pump in check, which can spike if the stroke length is too great or frequency is too high.

“I have to retune parts of the system every time we change fuels,” adds Fairbanks in the cover story. “We are constantly studying different fuels, so this happens frequently. Being able to streamline this process with simulation is a huge benefit.”

Fairbanks can even create hypothetical problems. “I can feed modified pressure data from previous runs and create conditions such as fuel pressure overshoot, oil pressure spikes and others to see if the control program I wrote makes the cylinders respond correctly,” he says in the cover story. “It’s a very useful way to test the logic of the program, and I’ve continued to use the simulator while trying to optimize the programming or add new functionality.”

While the simulator works well, setup was challenging. “Our high-pressure fuel system is extremely complex, which made creating a numerical simulation as realistic and accurate as possible both tedious and time consuming,” explains Fairbanks in the cover story. “It can be difficult to accurately model some of the interactions between hardware and fluid components during our extreme
operating conditions.”

In the cover story, Fairbanks says, “In the end, we were able to create a simulation that captured all aspects of final system implementation.”

As for future improvements, “Providing more user-friendly tools to record data during system operation, and ways to interface this data with simulation tools to make adjustments or corrections in a simulation to use during further development, would be invaluable,” concludes Fairbanks in the cover story.

What Type of Photoelectric Sensor Is Best For Me?

There are many different styles of photoelectric sensors, but only four basic technologies:...