Industrial facilities have lots of enclosures housing automation and electrical components, many of which need cooling and heating. We’re going to show you how to pick the right enclosure conditioning system from these leading options:

It’s simpler to heat than cool, so let’s discuss this first.

A Need for Heat

An electric heater installed near the bottom of the enclosure will usually do the trick. If the enclosure is big and needs over 100W of heating, a fan integral to the heater may be needed to circulate the hot air throughout the enclosure.

Heaters are usually controlled by a normally-closed thermostat or hygrostat, either integral to the heater or a separate device. Thermostats can be purchased as fixed temperature (pre-set on/off temperatures) or adjustable temperature models.

Many enclosures don’t need heating, but most need at least some type of cooling.

If the air inside an enclosure gets too hot, it can reduce the life expectancy of costly control components such as PLCs, HMIs and AC drives. Too much heat can also cause nuisance faults such as thermal overloads tripping.

Where does this heat come from? Often from the same components that can be damaged by too much heat including power supplies, AC drives/inverters, transformers, communication devices, battery back-up systems, soft starters, PLCs and HMIs. Heat produced by these components can be added to by external heat sources such as high ambient temperatures, solar heat gain, and nearby equipment such as ovens and furnaces.

Fortunately, there are lots of ways to keep your cool.

Convection is heat transfer between a moving fluid, typically air, and a solid surface, where there is a temperature difference between the fluid and the surface. Convection cooling is why it’s colder on windy days than calm ones.

Convection is complex, but can be simplified by keeping these principles in mind:

A simple way to cool enclosure air is via natural convection through the surface of the enclosure, which causes warm air to rise and be replaced by heavier cool air. This induced air flow can be used to remove heat by adding louvers near the top of the enclosure to allow hot air to escape, while grilles can be added near the bottom to allow outside air to be drawn in.

But air flow rates induced by natural convection are minimal, and the maximum ambient temperature must be colder than the maximum allowable enclosure temperature. Also, the enclosure protection rating must allow it to be open to the surrounding atmosphere without risk of component failure due to dust or water intrusion.

Forced convection utilizes some type of air-moving device to increase the flow of air across the enclosure components, which increases cooling. Fans are the simplest air movers, but have many of the same limitations as natural convection.

Fans don’t use much power, so they often run continuously. But in applications where there’s also a heater, a normally-open thermostat should be installed to prevent the fan from working against the heater. 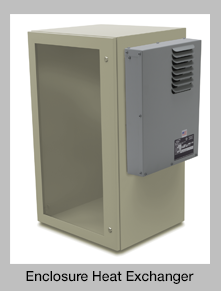 fan, and like all convection cooling systems can only be used where the maximum ambient temperature is less than the maximum enclosure temperature. But, heat exchangers create a closed-loop system in which the air inside the enclosure is cooled and circulated without any exchange with ambient air, maintaining the enclosure’s NEMA rating.

Heat exchangers may be used with NEMA 4, NEMA 4X and/or NEMA 12 enclosures in indoor or outdoor application. Like a fan, a heat exchanger may be installed with or without thermostatic control.

When convection cooling methods aren’t enough, other methods must be employed.

Crank up the AC 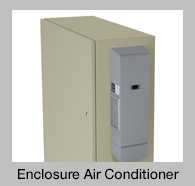 Air conditioners create closed loop cooling like a heat exchanger, as the air inside the enclosure is cooled by an evaporator coil and circulated without bringing in outside air.

An air conditioner utilizes a more sophisticated refrigeration cycle than a heat exchanger, employing a refrigerant compressor and an expansion valve, adding to cooling capacity.

Air conditioners are very efficient, but require regular maintenance and tend to be pretty big. Most air conditioners include an integral thermostat to control operation, limit power consumption and extend service life.

Other alternatives for enclosure cooling include vortex coolers and ther 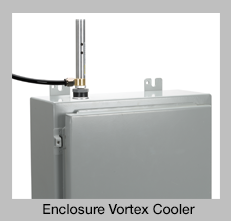 moelectric coolers, both of which have their advantages and drawbacks. Vortex coolers are
much smaller than AC units, but they need a continuous supply of compressed air.

Thermoelectric coolers are also available in very small sizes, but they are less efficient than air conditioning systems, using about four times the electrical power to produce the same cooling effect.

Knowing your heating and cooling options will help you to make the best choice for your application. To read more on this topic, please view Keeping Enclosures Conditioned in the Oct 2015 issue of Plant Engineering, authored by Jody T. Kinney, PE, Product Manager for Enclosures & Tools at AutomationDirect.[hozbreak] 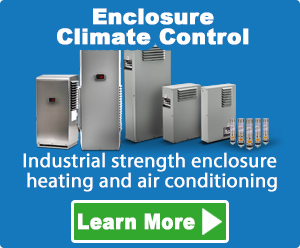 What to Know When Selecting an Enclosure

Internal & external sources often cause internal enclosure temperatures to rise. Read how to get...

Specifying Thermal Management Systems for a...

Check out the best ways to choose a thermal management system for your control enclosure! Learn...

How to Select and Size Enclosure Thermal...

Housing electrical components inside an enclosure in industrial applications protects them from...

AutomationDirect has a new line of Saginaw enclosure air conditioners designed to keep the...