PLCs Have Many Uses in Radio Broadcasting

There is lots of impressive technology used in broadcasting, but control of transmitters, audio sources, power and facilities is often low tech. A seasoned broadcast engineer is addressing this issue by using PLCs to improve broadcasting, starting with remote transmitter sites at iHeartMedia in Los Angeles.

According to the iHeartMedia website (www.iheartmedia.com), there are over a quarter of a billion monthly listeners in the United States, with a high percentage of them in Southern California. To reach these SoCal listeners, iHeartMedia has 10 radio stations installed in an area the size of South Carolina.

In radio and TV broadcasting, it’s easy to get distracted by things like audio processing, coding algorithms, Ethernet-based audio over IP, acoustics and microphones. However, the radio system transmission system is critical because it connects all the hard work in the studio to the listeners. If things aren’t working right, a broadcast engineer must often get in a car and drive to an unattended transmitter, repeater or translator site to flip switches and perform manual adjustments.

Recently, broadcast-specific control systems have become available to provide basic, dialup-modem remote functions such as alarm notification via phone or email, and simple programmable macros for automatic functions. But these rudimentary systems cannot come close to what a PLC can provide.

Dennis Sloatman, Vice President of Engineering and Information Technology at iHeartMedia, Los Angeles has been working in the broadcast industry for 46 years. He is now using PLCs to automate traditionally manual or semi-automatic broadcast functions. Specifically, he’s using a PLC to automate the switching and backup functions of a transmitter and antenna system, improving operations and reliability while cutting costs. 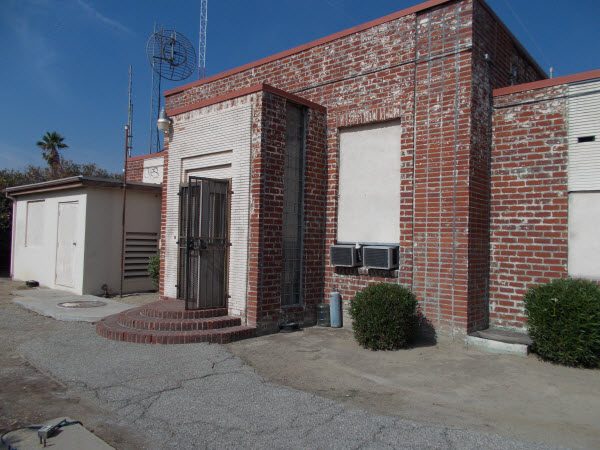 Many engineers and technicians in the broadcast industry aren’t familiar with PLCs or their potential use in broadcasting. While complex audio distribution amplifiers and mixers may be well understood, using a PLC to control broadcast functions is not, and neither is ladder logic or the related tag databases.

Many broadcast engineers don’t realize that PLCs and other common industrial automation hardware are an excellent option for monitoring and controlling a radio transmission facility. Instead they use custom electrical cabinets with relays, timers, capacitors, diodes and even Raspberry Pi controllers. That’s not very reliable when compared to a robust PLC.

This is unfortunate because the reliability of PLCs is needed in broadcasting due to many sites being located on mountain tops and other hard to access locations. These sites often need automatic failure switchover and remote connections, functionality at which PLCs excel.

To address reliability and other issues found with traditional radio broadcast control systems, an AutomationDirect Productivity2000 PLC was selected to control a transmitter and antenna at iHeartMedia’s Dodgers Flagship station in Los Angeles, KLAC AM 570. 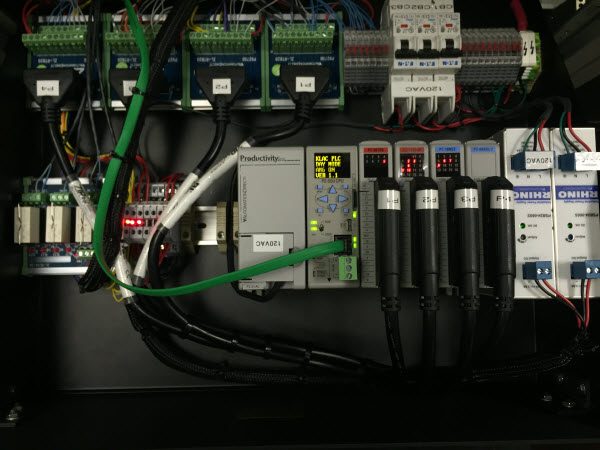 The PLC is automating the switching of daytime and nighttime patterns at KLAC, a directional, amplitude-modulated (AM) radio station. During the day, a single antenna operates in a non-directional mode. At night, when the AM signal travels farther, it is switched to operate with two antennas, providing a directional signal to reduce interference. The FCC requires this switching, which the PLC performs automatically, sending an email to confirm the change.

Listeners want to hear the announcer and not awkward silence during Dodgers’ games. The station must stay on the air, and the PLC helps to ensure continuous radio signal transmission by controlling and monitoring the main transmitter. It will attempt to restart the transmitter if it fails, and it will switch to a backup transmitter if the restart fails. It can even switch to a third transmitter, with a weaker signal, if necessary.

An AutomationDirect C-more touch panel display is used to select a mode of operation and manually select a transmitter. It also displays transmitter switch times, along with analog set points and parameters such as transmitter power output, antenna current and transmitter system status. The display also provides calibration functions. 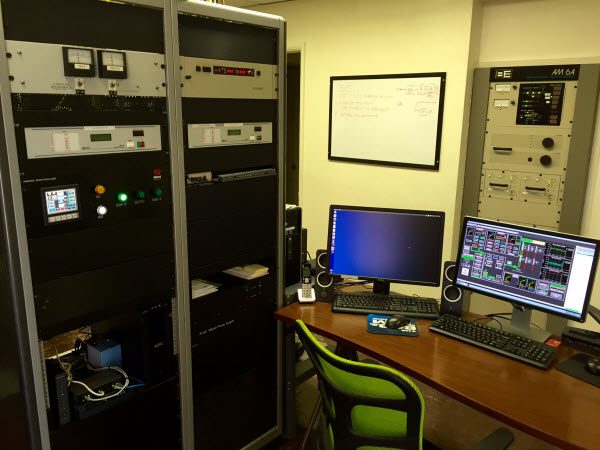 Dennis said working with AutomationDirect was simple and straight forward. He liked the low cost, quick delivery, and ease of use. The order status email updates were helpful as well. He did call a few times for technical support, and received quick and comprehensive answers.

The PLC-powered broadcast transmission and antenna switch system is working reliably, transmitting at high power from a remote location. Many more broadcast-related systems can be automated using AutomationDirect hardware such as FM antenna switching, power control, fault detection and transmission line pressurization. Some have already been dreamed up and planned by iHeartMedia, while other are in the testing stage.