Pneumatic systems are widely used for many reasons. They’re durable, clean, affordable, and fairly easy to install and maintain. They move loads in a variety of ways: pushing, pulling, lifting, lowering, and rotating. And they can handle widely varying payloads. While not ultra-precise in terms of positioning capabilities, they are accurate enough for countless applications. 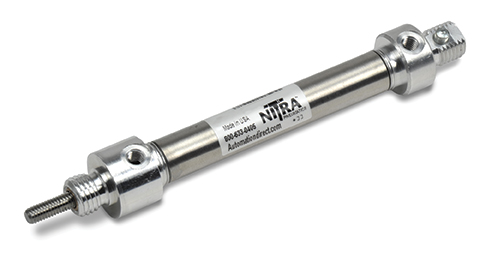 However, the relative simplicity of pneumatic systems can be deceptive when it comes to selecting components. There are thousands of types, sizes, and variations of cylinders and valves, from off-the-shelf versions to custom designs. The sheer number of choices can be overwhelming, especially when options such as sensors are added to the mix.

Taking the time to choose the right components for a job helps ensure good performance, lower expenses, improve cycle rates, and prolong equipment life. This article examines the parameters – load, force factor, speed, and sequencing, as well as the impact of other components – that engineers should take into account when selecting a cylinder for a pneumatic system.

Although there are many types of cylinders, their construction is fairly similar. Basically, a cylinder is a sealed tube. It contains a rod, attached to a piston, which extends through an opening at one end. Compressed air enters through a port at one end of the cylinder, causing the piston rod to move. At the other end, a second port lets air escape. Understanding the basics helps to show how different applications affect the cylinder and piston rod.

The first step in choosing a cylinder is deciding whether to use a single- or double-acting style. As the name implies, single-acting cylinders use compressed air to move the load in one direction, such as lifting an object. With single-acting cylinders, air is supplied to only one side of the piston, while the other side vents the air to the environment. A spring (or, in some cases, gravity) returns the piston to its original position once air pressure is removed.

A double-acting cylinder uses compressed air to power the rod in both directions and move a load, such as opening and closing a gate. This type of cylinder uses more energy, but it’s well suited for loads that require both pushing and pulling.

The load is the primary consideration when determining cylinder type and piston size. (Figure 1) The piston area (force factor) multiplied by the air pressure in the cylinder gives the available force. A general rule is to select a force factor that will produce a force 25% greater than the load to help compensate for friction and losses. Pneumatic systems are quite forgiving in terms of oversizing, but using components that are too big adds unnecessary expense in terms of both purchase price and energy consumption.

The bore size (force factor) determines force at a given pressure. The operating pressure, which in a plant can typically range from 10 to 150 psi, is the first consideration when selecting a bore size.

Another important consideration is the amount of force that the application requires. Suppliers often provide charts to assist with calculating bore size. If the bore diameter is between sizes, fluid-power experts recommend rounding up to the next size.

In addition to load, designers must also take into account the speed at which the load will move. When compressed air flows through a system, there are pressure losses due to friction against the tube wall, flow around bends, and restrictions in valves and fittings (to name a few issues). Higher speeds result in greater pressure loss as the air must flow faster through the valves, tubing, and ports. Attaining higher speeds also requires that the cylinder deliver more force in a shorter amount of time. A force that exceeds the load by 50% or more may be required to reliably move a load at high speeds.

For example, a typical air compressor might supply air to a system at 100 psi. In an application with a slow-moving load, the actual pressure available at the piston might be reduced to no less than 90 psi. With that same load moving at a much faster rate, the available pressure could drop as low as 70 psi.

Pressure losses can be remedied by increasing pressure, but this must be done with caution. Too much pressure creates stress on the cylinder and could possibly damage the cylinder, as well as the load. In these instances, it’s better to choose a larger cylinder. (Figure 1) Also keep in mind that raising system pressure means the compressor must work harder, increasing energy consumption of the overall pneumatic system.

With heavy loads, the size of the piston rod is as important as the cylinder size and air pressure. A common problem is overloading the rod, which often happens when pairing a heavy load with a long cylinder rod. During horizontal motion the load will hang off the end of the rod, which may cause the rod to bend when fully extended. When lifting a heavy vertical load, the piston rod may even buckle if it’s too small.

Cylinders are designed primarily to push or pull a load, so supporting heavy side loads requires extra planning. Keeping the cylinder thrust as close as possible to the centerline of the piston rod should be factored into the design.

Another consideration is the rod length. Strokes of about 24 inches and longer can compromise a long, skinny rod. In this case, the best solution is to choose a bigger cylinder. Some manufacturers also offer cylinders with oversized piston rods, which can be more economical in some cases.

Also consider cylinders with guide rods in difficult loading situations. With blocks and rods mounted parallel to the piston rod, guided cylinders prevent the piston from rotating and increase load-carrying capacity, thanks to the added support of the guide rods and additional bearings. This is important when a system is subjected to large side loads or requires highly accurate controlled linear motion. (Figure 2) Finally, rodless cylinders in which the load sits on an external carriage that slides along the tube can also be used for applications with long strokes, heavy loads, or high moment loads. These cylinders come in a number of different configurations and their compact size makes them a good fit in tight spaces.

Getting the Valves Right

Valves control the switching and routing of air in a pneumatic system. Aside from controlling the flow of compressed air, valves also direct the flow of the exhausted air. Many types of valves are used in pneumatic systems, with the specific application dictating the best choice.

One common mistake in designing a pneumatic system is to properly specify the cylinder but undersize the valve. Properly matching the valve and cylinder is imperative, since the cylinder won’t move as intended if the valve is too small. With higher speeds, airflow must be increased to move the load quicker, and that often means a valve with higher flow capacity.

Most valves come with a flow coefficient (Cv) rating. In essence, the bigger the Cv, the more air flows through the valve. The valve rating should typically be selected for a 5-psi pressure drop at the required flow rate to drive the cylinder at the desired speed.

Flow-control valves work well at controlling cylinder speed. These can either be adjustable restrictors on the control-valve exhaust ports or special valves mounted on or near the cylinder. Cylinder-mounted flow controls have a one-way bypass built in to allow free flow in one direction and restricted flow in the other. For the best results, install these valves to give free flow into the cylinder and restricted flow out.

Position switches and sensors can improve overall pneumatic performance. In a system with multiple pneumatic actuators operating in sequence, position sensors that indicate the piston location in each cylinder will promote shorter, more-reliable cycle rates.

Simple switches such as reed, Hall-effect, and magneto-resistive switches are all commonly used as position sensors on pneumatic actuators. Regardless of the type, they all detect the piston position as the cylinder approaches the end of the stroke.

Without sensors, unnecessary stops (time cushions) must be built into the timing of the system. This is the result of air-supply variations and other factors. In a plant, airflow might be slightly less during the afternoon as compared to the morning. This means in the afternoon it might take a fraction of a second longer to complete the stroke, which could disrupt the timing of other steps in an operational sequence. To adjust for these and other variations, low-cost sensors should be included in the design. Adding such sensors will result in shorter cycle times, smoother operation, and higher operating efficiency.

Pneumatic systems remain popular due to their low entry and maintenance costs. While they’re relatively simple, weight, force, speed, and other requirements must be considered at the design level to ensure proper operation. Given the many different types of cylinders, valves, and sensors, taking the time to determine the right components in a pneumatic system – and how they interact – will result in better performance in both the short and long term.

Account for each of these factors when designing pneumatic cylinders into machines, robots, and any other piece of equipment:

Load – A force at least 25% greater than the load is typically necessary to make up for system pressure losses.

Other components – Available pressure at the cylinder can be affected by system compressor, filters, regulators, control valves, and all connecting piping. Right-sizing these components helps ensure the best performance from a cylinder.

Learn the basic function of a pneumatic actuator, the relationship with a fluid power system &...

Check out this article and make your next DIY project a pneumatic saw clamp! Quick and easy with...

Pneumatics are a cost-effective choice for mechanical motion, but only when implemented...