During the summer of 2015, while many Scouts were going to traditional summer camps, a group of Scouts from the Twin Rivers Council in New York spent a week at STEM Camp where they participated in Electronics, Engineering, Surveying, and Programming Merit Badges.

The Scouts were thrilled to learn how to program the same PLCs that are used to run factories every day. They learned how to program an AutomationDirect CLICK PLC to respond to button presses, turn lights on and off, control fans, and use sensors to detect metal objects – all the same kinds of skills used to run today’s automated production lines. 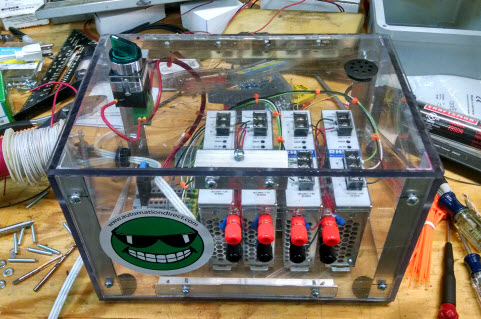 The PLC programming test stations were built by Russ Elster, a Scoutmaster with Troop 2752 in the Mahikan District. Russ used the same PLC test station design that was used for the launch of the Programming Merit Badge at the 2013 National Jamboree at the new Summit Scout Reservation in West Virginia. That worked out well because they could take advantage of the same supporting videos and sample programs used at the Jamboree.

The Twin Rivers Camp Director, Brian Murray, said “The STEM Week program at Rotary has proven to be incredibly popular and we could not do it without the generous support of companies such as AutomationDirect. The Scouts had a great time and it was a great treat to watch them so fully engaged using the hardware you provided and learning from Russ’s excellent tutelage. Every Scout walked away with great memories, and for many perhaps, a future hobby or career!” AutomationDirect supported the development of the Programming Merit Badge and sent a team of 16 people to the 2013 National Jamboree to launch the merit badge, where over 800 Scouts learned how to program PLCs. “AutomationDirect is a huge supporter of the ideals and methods of Scouting and was happy to help the Twin Rivers Council with their STEM Camp,” says Rick Folea, a Sr. Technical Marketing Specialist with AutomationDirect.

If you ever stop by AutomationDirect’s headquarters in Georgia you can see the giant 6 foot tall copy of the Scout Law mounted on a wall in the main lobby!

You can learn more about the Programming Merit Badge, as well as its requirements, at: www.boyslife.org/programming.

To learn more about the CLICK PLC, go to: www.AutomationDirect.com/click-plc.

CLICK PLUS PLC was announced as the Control Engineering 2022 Engineers’ Choice Awards winner in...