Programmable Logic Controllers (PLC) are often defined as miniature industrial computers that contain hardware and software used to perform control functions. More specifically, a PLC would be used for the automation of industrial electromechanical processes, such as control of machinery on factory assembly lines, amusement rides, or food processing. They are designed for multiple arrangements of digital and analog inputs and outputs with extended temperature ranges, immunity to electrical noise, and resistance to vibration and impact. A PLC will consist of two basic sections: the central processing unit (CPU) and the Input/Output (I/O) interface system. 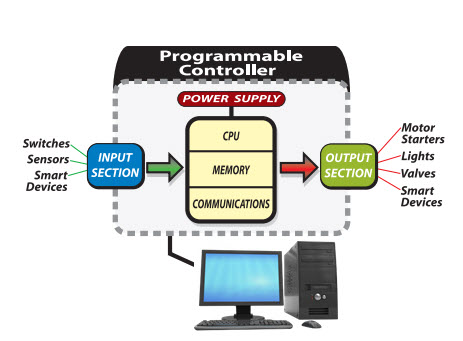 The CPU controls all system activity primarily through its processor and memory system. The CPU consists of a microprocessor, memory chip and other integrated circuits to control logic, monitoring and communications. The CPU has different operating modes. In programming mode the CPU will accept changes to the downloaded logic from a PC. When the CPU is placed in run mode it will execute the program and operate the process. Input data from connected field devices (e.g., switches, sensors, etc.) is processed, and then the CPU “executes” or performs the control program that has been stored in its memory system. Since a PLC is a dedicated controller it will process this one program over and over again. The time it takes for one cycle through the program is called scan time and happens very quickly (in the range of 1/1000th of a second, depending on your program). The memory in the CPU stores the program while also holding the status of the I/O and providing a means to store values.

The input/output system is physically connected to field devices and provides the interface between the CPU and its information providers (inputs) and controllable devices (outputs). After the CPU processes the input data (input scan), it will then make any needed output changes after executing the user program (output scan). There are four basic steps in the operation of all PLCs: Input Scan, Program Scan, Output Scan, and Housekeeping. These steps continually take place in a repeating loop.

Typical PLCs have a wide range of I/O modules available to accommodate all kinds of sensors and output devices. For example, discrete input modules can be used to detect object presence or events with devices such as proximity or photoelectric sensors, limit switches and pushbuttons. Discrete output modules can control “ON/OFF” loads such as motors, lights, and solenoid valves. Analog input modules can accept signals from process instrumentation such as flow, pressure, temperature and level transmitters. These modules can interpret the signal and present a value within a range determined by the devices’ electrical specifications. Analog outputs will command loads that require a varying control signal, such as panel meters, variable frequency drives or analog flow valves. Many PLCs also offer specialized modules such as high-speed I/O or motion control, and serial or Ethernet communications.

The greatest benefit of automating with a Programmable Logic Controller is the ability to repeat or change the operation or process while collecting and communicating vital information. Those making the buying decisions for Programmable Controller applications can have very different needs. Cost, power, speed, and communication are a few of the many considerations when choosing the right PLC for the job.