Ethernet is the most widely used network in industrial plants and facilities. Here’s a primer covering its foundational concepts.

Bill Dehner, technical marketing engineer at AutomationDirect, wrote an article for the October 2018 issue of IMPO titled Ethernet Basics for Facilities. Here’s a summary, please click on the link above for the full text. 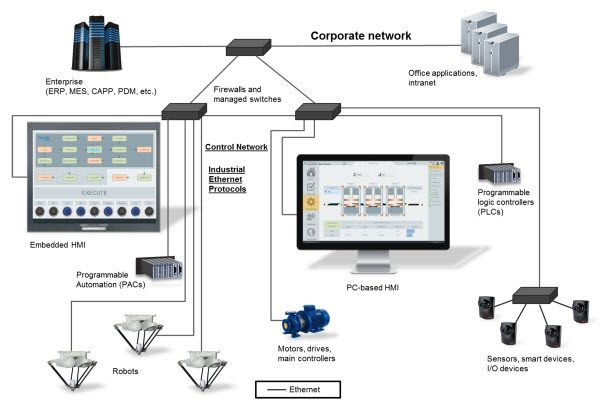 In an industrial environment, Ethernet is used to network PCs, controllers and other intelligent industrial automation components.

There are currently three versions of Ethernet: 10BaseT, 100BaseTX (also known as Fast Ethernet) and 1000BaseT (also known as Gigabit Ethernet because it transmits Ethernet frames at a rate of one gigabit per second).

Fast Ethernet is used in most industrial automation applications because its raw speed is more than sufficient, but this can be affected by the selection of half or full duplex. With half duplex, a device can only transmit or receive, but can’t do both simultaneously. This reduces performance, and in the worst case half duplex devices drop packets under heavy load due to data collisions. Per Bill, this issue can be addressed by using full duplex communications.

Most components and devices used in Fast and Gigabit Ethernet installations therefore use full duplex, meaning the node can transmit and receive simultaneously.

What are MAC Addresses and IP Addresses?

An Ethernet hub simply connects Ethernet devices together with no regard for MAC addresses, so all messages are sent to all devices. An unmanaged switch is a little smarter, using the MAC addresses to determine what components and devices are connected to each of its ports, and then routing messages targeted to those components and devices out the appropriate port, preventing the collisions often occurring with an Ethernet hub. Ethernet hubs are an older technology, sending all messages to all connected devices or components. Switches are able to selectively route messages to appropriate ports, preventing collisions and improving network throughput.

A router is a more powerful version of a managed switch, with the ability to create different groups of components and devices within an Ethernet network. Creating groups allows one part of a network to be separated from another, a useful feature for managing network traffic. A virtual private network (VPN) router should be used when connecting a network via the Internet to provide the required degree of cybersecurity.

What are Ethernet Protocols?

The two leading industrial Ethernet protocols are EtherNet/IP and Modbus TCP IP. A standard Ethernet network could in theory have both of these protocols running on it simultaneously, but in practice it’s better to limit each network to one protocol.

To simplify, a protocol allows every device on the network to use a common language for communication. To understand this subject more deeply, it’s necessary to look at the Open Systems Interconnection (OSI) 7 layer model for Ethernet communications. Most industrial Ethernet protocols don’t use all 7 layers of the OSI 7 Layer Model.

Messages initiate at a device connected to Physical Layer 1. The Data Link Layer 2 is the next one up, acting as a traffic cop in the form of Ethernet switches and other Layer 2 devices. These devices use the MAC address of each component or device to figure out which packets go to which ports, and strip off the MAC address in the process. Similarly, network layer 3 uses the IP address to route the data packets. Finally, transport layer 4 delivers the data payload, the actual Modbus message for Modbus TPC IP, up to layer 7.

Layer 7 is the Application Layer, and this is where a common language is important. Although other industrial Ethernet protocols may be identical to Modbus TCP IP in their use of layers 1-4, and can thus use the same network, they won’t be able to communicate with each other because their application layer 7 is different.

To read more articles similar to this, click here.