The Challenge
Diffuse sensors enjoy great popularity with users. With diffuse sensors, pulsed light from an emitting diode falls on an object of any shape or color and is reflected in a diffuse manner to a light-receiver, which is located in the same device (fig.1). If the intensity of the received light is sufficient, the output is switched. Operating distances depend on target size, color and surface structure.

The use of diffuse sensors is generally trouble-free. However, a problem appears when devices with very small diameters (M5 or less), short operating distances and/or narrow total beam angle are called for. (See fig. 2) Technical Analysis
Conventional diffuse sensors work using optical lenses. It should be noted that two optical systems are required in the same device, one for the emitter and one for the receiver. No appreciable problems arise when scaling down the optics of the emitter and receiver to put into a small housing. However, there are fundamental limitations. The lenses themselves can be reduced in size almost indefinitely, but the dimensions of the transmitter and receiver components cannot. Light emitting diodes (LEDs), which are available in very small housing sizes, are generally used as the transmitters. These housings are still much too large for really small reflex sensors. It would appear the only remaining solution would be to change to unhoused chips; however, their use would add considerable cost. Only now can the basic challenge be recognized. An optical system is shown to scale in fig. 3. In this figure, the LED chip is extremely large in relation to the lens diameter. Inevitably, the result is very poor beam quality. Both the quantity of output-coupled light and the total beam angle on the transmitter and receiver sides leave much to be desired. Smaller LED chips could be the solution, but these unfortunately do not exist. An additional disadvantage is that the roughly cubic LED chips emit their light more or less uniformly in all directions. The situation is no better on the receiver side.

One elegant and effective solution for light coupling and shaping has been developed in the form of cylindrical miniature devices in which the lenses have been replaced by concave mirrors.The result is impressive, with an operating distance of 50 mm. However, the total beam angle of ± 22° is quite large, in fact too large for many applications.

From a technical point of view, the obvious solution when narrow total beam angles are required is to choose lasers. However, laser devices cannot easily be inserted into small housings. In addition, there are economic considerations that currently limit more
widespread use of laser devices.

New technology – Spherical optics
In view of many unresolved detection problems in the miniature field, there is a solution. Amazing results can be achieved with spherical optics.With this technology, a sapphire sphere is cut in two in order to separate the transmitter and receiver parts. Between the two halves of the sphere, there is an opaque layer to prevent an optical short-circuit. The transmitter and receiver semiconductor chips are mounted as closely as possible to the surface of the sphere. As seen in fig. 4, the chips (LED and photodiode) are somewhat off the optical axis. This is normally a disadvantage in optics, but not in this case, since the transmission beam and the detection zone of the receiver “squint” somewhat or cross at a certain distance from the device. As a result, the detection zone is approximately cylindrical.
The optical system is vacuum potted together with the electronics module in transparent resin.

For comparison, the response curves of other miniature devices (fig. 6) and a typical optical fiber (fig. 7) are also shown. 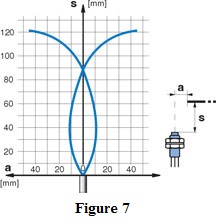 Application examples
The detection of objects through holes and gaps is very limited with most diffuse sensors currently on the market. The new spherical optics sensors succeed in such applications, especially in the case of small diameters or gap widths (fig. 8). Operating-distance independent approach
With laterally approaching objects, whose distance from the switch cannot be kept constant, there can be considerable variations in the switching point. The new spherical optics sensors yield much better results (fig. 9).

Longer operating distances than inductive devices
Inductive proximity switches are also an option and would be very suitable for solving the problems described above (as long as the objects to be detected were electrically conducting). However, their operating distances are very short (0.8 to 1.5 mm) and are frequently insufficient. The closest alternatives are photoelectric devices, but the shortest operating distance is about 50 mm. Nothing has been available for operating distances between 1.5 mm and 50 mm until the new spherical optics sensors, which now fill this gap.

By the Managing Director of
AutomationDirect’s sensor supplier

Although the North American market for automation and controls has seen nowhere near the growth...

A User’s Guide to Configuring Serial Ports for...

Check out the first part of our two-part series on Configuring Serial Ports for DirectLOGIC...

The Evolution of Wireless Communication

In 1901, Guglielmo Marconi used Morse code to communicate the letter "s". This transmission was...