CorrTech, Inc. is an industrial machinery services company that focuses on the corrugated paper and container industry. One of their customers, Smurfit Stone Enterprises in Ravenna, Ohio, recently requested the retrofit of a heavy-duty box-making machine built in the US circa 1970. The S&S ZLR Flexo Folder Gluer, which prints, folds, glues, and bundles boxes from flat corrugated sheets, was still in excellent mechanical condition, but over the years had developed electrical problems that were causing excessive amounts of downtime. Because of the antiquated relay and switch logic, pinpointing the root cause of the problem was very difficult and time consuming.

Tony Aman, maintenance manager at Smurfit Stone, asked CorrTech to upgrade the machine’s electrical system to improve reliability and safety. “Other integrators had quoted this project in excess of $75,000 — without advanced features like a touch-panel operator interface.” says Aman. “CorrTech leveraged their industry experience and the value of AutomationDirect equipment to complete the project for less than half that price, while adding features that are way beyond our expectations.”

Because this machine is critical to Smurfit Stone’s day-to-day operations, CorrTech agreed to undertake the project over the 2005 Thanksgiving holiday. The machine was gutted by removing all the control relays and wiring. CorrTech reconfigured the system using AutomationDirect’s DL06 PLCs, newly released C-more touch-panel operator interfaces, a GS series variable speed drive, and a Marathon motor.

One of the major concerns with the older system was the use of 480 VAC drum switches for controlling some of the motors. With focus on safety initiatives, CorrTech and Smurfit Stone considered this one of the prime justifications for the project. With the exception of a limited number of existing devices, the newly upgraded system is equipped with 24 VDC control wiring.

The operator controls were simplified with fewer buttons and more integrated functions. CorrTech selected a touch screen operator interface because it allows a myriad of controls and indicators in a small physical space. The new design allows monitoring of every connected machine component for machine status, safety conditions, faults, and more, that would have required additional space and hardware on standard pushbutton control systems. Operators and maintenance technicians can now work from a single location to
troubleshoot and operate the machine.

“We can’t describe how pleased we are with the C-More touch panels. They have the clearest screens, most memory, enhanced functionality, and even more features than we could incorporate into the system,” said Charles Lyle Adams, President of CorrTech. “TheC-more panels were a last minute addition. We had been using AutomationDirect’s older EZTouch screens, but the C-more panels became available a few days before we started the project. We obviously were not afforded a lot of time to learn the C-more programming language, but the panels turned out to be easy to program, easy to connect, and because of the standard Ethernet communications, we can troubleshoot and update the panel from our office in Georgia without having to travel to Ohio to plug in a special serial cable.”

CorrTech was able to reduce mechanical complexity and increase flexibility of the machine’s bundle pusher assembly with the addition of the GS series AC variable speed drive and Marathon inverter duty motor. 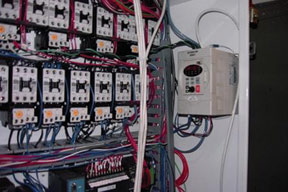 In the original design, a mechanical gearbox was timed to the speed of the machine via a chain, controlling the size of the finished box bundles that were produced. Prior to the retrofit, operators used an electric clutch and mechanical linkage to literally ‘shift gears’, selecting from a limited number of bundle sizes. The variable speed drive (VSD) and motor combination replaced the shifting gearbox and the old electric clutch, and now any number of boxes-per-bundle can be selected using the C-more operator interface. The VSD solution also enables overload protection, machine speed tracking, and in conjunction with the C-more operator interface, a multitude of diagnostic features.

CorrTech installed three AutomationDirect DL06 PLCs with 10/100Base-T Ethernet cards for networked communications. This allows control of over 150 I/O points with expansion capability. Any properly configured computer on the Smurfit Stone plant-wide network will be able to access the PLCs and the C-more panels. “The Ethernet communication is so fast that we were able to use one of the PLCs as a ‘Master’ to control the outputs of the other two ‘remote’ PLCs across the Ethernet network. We weren’t sure it would work initially and thought we might have to program the other two PLC’s with parts of the machine control logic,” explains Adams. “But, not only does it work flawlessly, we saw no noticeable difference between the I/O speed in the Remote PLCs and the I/O update speed across the backplane in the Master PLC.” For safety purposes a few rungs of ladder were used in each of the remote PLCs to verify the communications link and for setting the outputs to a known safe state if a communication loss is detected. “Ethernet communication is fast, universally accepted, and easy to implement,” concluded Adams.

By using C-more and Ethernet communications, CorrTech was able to incorporate productivity monitoring software into the system. This system monitors downtime causes and other performance data, and sends the information to a PC-based server for historical trending and further analysis.

While the customer may not have been expecting all of the features that CorrTech incorporated into this machine upgrade, the promise of an affordable upgrade was what clinched the deal for CorrTech. “We know that by using AutomationDirect components we saved a considerable amount of money and gave the customer enormous expansion capabilities. To sum it up, the PLC hardware, for 150 IO points, expansion capability, and standard Ethernet communications, was around half the cost of other automation suppliers such as Allen-Bradley, Siemens, and other vendors we have used in the past,” asserts Adams. “And that is without even mentioning the tremendous value of the C-more touch screen – Smurfit Stone never expected the level of operational ease and maintenance capability that the touch panel interface provides. We are convinced that there is no better value than AutomationDirect in the industrial automation market.”

“The only items we used for this project that we did not obtain from AutomationDirect were wire, 2 safety switches, and some miscellaneous supplies. All other components were ordered online from AutomationDirect.com.” In addition to the “one-stop-shopping” and the low prices, Adams was pleased with the support he received “after the sale.”

CorrTech had planned to replace some manual 3-phase drum switches with 24VDC motor starters to allow monitoring of the overloads and display specific fault conditions on the C-More panels. After arriving on site for the retrofit, they found that some of the overloads had been sized for 480V instead of the 230V units that were shown on the 30-year old schematics. “We made one call to AutomationDirect and arranged for new overload relays to be delivered to us on Saturday morning, so the start-up of the system would not be delayed. There just aren’t many companies that offer that kind of service to their customers” asserts Adams.

CorrTech is now preparing to standardize the process and offer their S&S Electrical upgrade in near “kit” form. While they will still offer their experience on-site to perform the retrofit, CorrTech hopes to market the upgrade to other Smurfit Stone locations, as well as the many other companies that still own and operate S&S made machinery. CorrTech is confident that the marriage of a modern AutomationDirect control system to the robust, ‘heavy-metal’ machinery of S&S will offer their customers true value, improve their box-making uptime, and extend the service life of their machines for decades to come.
Late Breaking News: As this article goes to press, the machine has just set a new production record, and Smurfit Stone has asked CorrTech to retrofit another of their S&S machines.

Their main areas of expertise include Machine Control, Data Collection, and Motion Control. CorrTech, Inc. can be reached at 770-888-3336 or online at www.corrtechinc.com.

Bio Diesel Fuel Gets a Boost from Automation

Learn how used organic oils can be turned into bio diesel fuel and have a second life instead of...

Available in many combinations, filters and regulators are a must-have on any machine for air...