A better understanding of photoelectric sensors helps when applying these versatile, non-contact presence sensing devices in industrial machine, conveyor and other applications

By Andrew Waugh, Product Manager for Sensor and Safety Products at AutomationDirect

A photoelectric sensor, often called a photo eye, uses light to detect the presence of an object or its distance from the sensor, a common requirement in industrial applications. The concept is simple and involves a light source, an emitter and a receiver that combine to detect changes in light intensity from a light-activated or a dark-activated device (Figure 1). 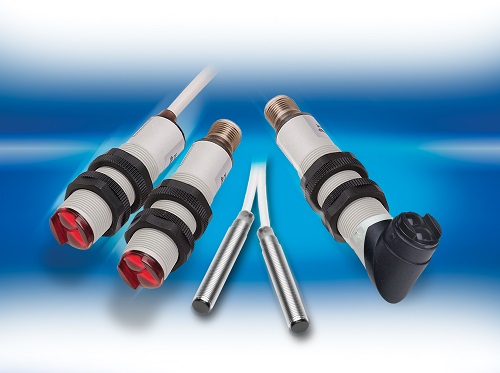 Figure 1: These AutomationDirect photoelectric sensors detect object presence or distance in a wide range of industrial applications, and typically contain all required optics and electronics in a single unit.

The light source can be of various frequencies, but most often visible red or infrared, and is projected from the emitter, also called a sender. The receiver collects the light and measures its intensity for distance sensing applications. These emitter and receiver elements can be in the same housing, or in different housings.

The two configurations available with photoelectric emitter and receiver in the same housing are diffuse and retro-reflective. Diffuse sensing uses a sensor head with an integrated emitter and receiver. The emitted light is bounced off an object and back to the receiver. An advantage of this configuration is that there is just one sensor to mount.

The other configuration is retro-reflective, often called reflective. This requires mounting a reflector, which can be polarized, to bounce light back to the receiver (Figure 2). This is a popular configuration because of the reliability of bouncing the emitted light off a fixed element and not an object. Figure 2: This polarized, retroreflective, 12-mm round, metal photo eye from AutomationDirect detects presence when the object interrupts light rebounding off a fixed reflector.

The configuration where the emitter and receiver are in different housings is call a through-beam installation. Through-beam photo eyes allow for the longest operating distances because the receiver element “sees” the emitted light directly. A benefit of this configuration is that the color, shape or angle of presentation of the object to the light is moot. However, an individual sender and receiver must each be mounted and wired.

In general, photo eyes have a longer sensing range than other presence sensing device technology such as inductive, magnetic, capacitive and ultrasonic. Photo eyes are also available in many housing sizes, with excellent sensing range to size ratios.

Exactly how the light is sent and received can vary. In most cases the sender will just transmit light of a certain wavelength using an LED, and the receiver will sense the light using a phototransistor, and then energize an output. To avoid interference from ambient lighting, some sensors will pulse the light, or filter the receiver to only sense a specific wavelength.

When a reflector is used, adding a polarizing filter rotates the light 90 degrees. This phase sifts allows only a preconfigured phase angle to be reflected to the receiver, helping to eliminate false detection of an object similar to the reflector.

Adjusting or programming photoelectric sensors essentially changes the threshold of light required to energize the sensing element. The type of object being detected can significantly change the threshold for proper operation. For example, a diffuse sensor is used to detect a dark object 1m away. A powerful light emission source is necessary because when the light bounces off the object, much of it is absorbed by the dark surface, returning little light. The threshold to detect this dark object would be very different from the threshold to detect a white object at the same distance.

The detection distance can also greatly affect the threshold. When detecting objects at only 1cm away, whether dark or light, there will be much more light reflected back to the receiver due to the short travel distance as compared to a 1m sensing distance.

To combat this color effect between dark and light objects, some sensors monitor the angle as the light bounces back (Figure 3). This is only found in diffuse applications and can be used to determine the distance of the object from the sensor. Instead of looking at the intensity of the light reflected as with a conventional distance sensor, an array of receiving elements are used. Depending on which element sees the light, the sensor can “triangulate” the distance to the object. Figure 3: A diffused photoelectric sensor uses a sensor head with integrated emitter and receiver, with emitted light reflecting from the target object back to the sensor.

Another technology used for distance sensing is measuring time of flight of the light from sender to receiver, often used with laser light elements because the light source can be tightly controlled.

As with photo eyes, color sensors and contrast sensors are also available. A color sensor detects colored objects and is often used in quality control and print accuracy applications. This sensor typically uses a white light source to evaluate the object color in the ROYGBV color space. Contrast sensors determine contrast, such as on a print mark, by sensing reflected light using either a white or RGB source to detect the difference in the wavelength of the reflected light between the mark and background.

Andrew Waugh is the product manager for sensor and safety products at AutomationDirect. He has more than 16 years of experience with machine sensor and safety devices used in packaging, assembly, material handling and process control applications. Prior to joining AutomationDirect in 2010, he worked at ifm efector as a Product Specialist for 9 years. Andrew holds a BSME degree from Penn State University. A proximity sensor allows non-contact detection of objects. They are used in many industries,...

What Type of Photoelectric Sensor Is Best For Me?

There are many different styles of photoelectric sensors, but only four basic technologies:...

What is a Limit Switch?

What is a limit switch? Check out this article for a better understanding of mechanical limit...

Let us help you sort out your sensor selection problem. Read more for guidance on choosing the...

What Is a Proximity Sensor? | AutomationDirect

What is a proximity sensor? Learn basic details about this useful tool including include sensing...