“After preliminary testing of our vehicle, and the subsequent breaking of a couple of welds, we’ve come to a few conclusions. First, our steering actuator has a lot more power than we really need! Second, we never should have attempted to test the steering system without the use of the encoder feedback. And third, we really need to add a couple of over-travel limit-switches to the steering system.”

This excerpt is just one sample of various e-mails exchanged by AutomationDirect and Team Buffalo over the last several months. Team Buffalo is a pair of engineers from Buffalo, NY, who constructed an entry for the 2005 DARPA Grand Challenge.

DARPA Grand Challenge 2005 is a field test of robotic ground vehicles for the purpose of advancing autonomous vehicle technology. The vehicles must travel approximately 150 miles over rugged desert roads using only onboard sensors and navigation equipment to find and follow a designated route while avoiding obstacles. After the October 8, 2005 event, DARPA will award $2 million to the team whose autonomous vehicle successfully completes the route the fastest, within a 10-hour period. All vehicles must be developed without government funding.

The Defense Advanced Research Projects Agency (DARPA) is the central research and development organization for the United States Department of Defense (DoD). DARPA’s mission is to “manage and direct selected basic and applied research and development projects for the DoD, and pursue research and technology where risk and payoff are both very high, and where success may provide dramatic advances for traditional military roles and missions.” DARPA was founded in response to the surprise Sputnik launch in 1958, and it’s been Uncle Sam’s hope that DARPA would help the U.S. avoid technological “surprises” created by other countries since then. Among other notable achievements, DARPA even helped to father the Internet along the way.

This is the second time DARPA has held the Grand Challenge. In 2004, none of the 15 teams entered was able to complete the course successfully. Some entries failed spectacularly, and others failed on the starting line, making no progress whatsoever. The two most successful teams managed to travel just 7 of the 142 prescribed miles.

The stated purpose of the Grand Challenge is “to accelerate development of autonomous vehicle technologies that will save lives on the battlefield.” Although there was no winner at the Grand Challenge 2004, DARPA obtained a number of important ideas that may lead to promising developments and is certain that important research progress will also be made leading up to the 2005 event, regardless of the outcome.

Team Buffalo is a two-man partnership lead by Mark Schwartz, a software engineer and a licensed master electrician specializing in systems integration, process controls and automation. He has over 20 years of experience designing and developing automation systems. Past projects include an emergency shutdown system designed for a multi-national chemical producer, and a satellite-based automatic dispatch system implemented for a national utility company. Schwartz has extensive software experience at both the embedded and applications levels, and enjoys developing practical solutions to real-world problems. 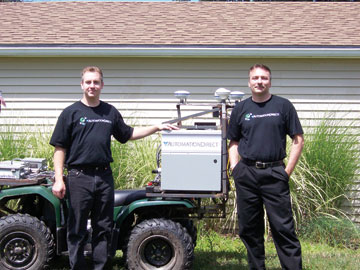 Joining Mark is Team Manager and Senior Engineer Brad Burzynski. Brad is a PLC programmer, systems integrator, and electrical engineer with over 10 years of field experience. Brad’s repertoire includes designing controls for an automated assembly line at one of the big three automotive manufacturers, and designing quality-control vision systems for a pharmaceutical giant.

Team Buffalo was formed in late 2004, and immediately began to design its vehicle and search for sponsors. While talking to AutomationDirect about a sponsorship, Team Buffalo lined up a number of other sponsors, according to their Web site. By the middle of January 2005, Team Buffalo had comfirmed sponsorships from an engineering software company, a local plastics thermoforming outfit, and most importantly, a catering service!

On February 1, Team Buffalo announced that a sponsorship agreement had been reached with AutomationDirect. According to Schwartz, Team Buffalo had been in discussions with several other international PLC manufacturers; however, AutomationDirect was the only PLC manufacturer willing to make a firm commitment and provide a concrete ship date. “They had everything we needed right in stock and were ready to ship overnight. Quality, service, and availability. What more could we ask for?” Schwartz said. On February 9, all requested PLC components were in-hand and Team Buffalo began to assemble its control system. Team Buffalo decided early on to use an All-Terrain Vehicle (ATV) as its “motion” platform. The combination of low-cost and go-anywhere design were compelling attributes. Modifications to enable autonomous control and the guidance system were begun only after an extensive test-driving and break-in period. Burzynski was eager to gain in-depth knowledge of the vehicle’s handling capabilities. He said, “I need to know the vehicle’s limitations and handling characteristics so I can program the PLC to those limitations.” The vehicle was dubbed the ANT: Autonomous Non-Manned Transport.
Team Buffalo’s approach to the navigation and control system was fairly straightforward: a pair of commercially available GPS systems that acquire position data, and a “heading” (direction of travel) from geo-synchronous satellites. This navigational information is transferred to a Pentium-class single-board computer via an RS-232 serial link. The PC is used to preprocess and filter the navigational information before sending it to an AutomationDirect DL205 PLC. The PLC controls servo actuators for steering and throttle control, and a linear actuator for “shifting” the transmission. The PLC also accepts inputs from seven ultrasonic “obstacle avoidance” sensors, and plots the actual course of the ANT. To quote Schwartz, “In essence, the single-board computer tells the PLC where we are now, where we want to go, and our current heading. The PLC then uses that information, along with the obstacle and collision avoidance information, to steer the vehicle toward our desired destination.”

With a vehicle procured, sponsorships lined up, and a control system design in hand, Team Buffalo worked day and night—seven days a week—to modify the ATV, fabricate the control system, and program the PC and PLC. As part of the formal application process to DARPA, the team was required to submit a 5-minute video, detailing and demonstrating the vehicle, by March 11. There were some hurdles, as Schwartz explains: “At first, we had some minor difficulty programming the analog inputs and outputs on the DL205 PLC. However, one quick call to AutomationDirect’s support line and we were back on track in no time at all. In fact, I was truly amazed at how fast we were able to get through to a knowledgeable support engineer. We had the answers and information needed to configure the analog inputs and outputs in less time than we typically spend on hold with some of the other PLC manufacturers.”
As detailed in the opening e-mail excerpt, Team Buffalo also learned a hard lesson about encoder feedback and limit switches for servo systems, but were up to that challenge as well. The two soon announced that they were one of 136 teams that had successfully completed the application process.

The Team continued working feverishly to complete and refine their design. On April 11, they were notified by DARPA that a formal site visit was being planned by the DARPA officials during the month of May. DARPA initially scheduled the visit for May 3. The team respectfully asked for more time, and DARPA denied the request. Then, lo and behold, DARPA decided to reschedule the visit for May 2!

The Grand Challenge rules stipulate that during the site visit, the team will have 3 hours to demonstrate the vehicle. The team is responsible for setting up a 200-meter course with at least two turns. Team Buffalo selected a 15-acre site of woods and fields behind several acres of lush lawn in a rural area of western New York. They had planned to set up the course in the woods. However, the wooded area was deemed too wet, so instead, a course was configured on the rain-soaked lawn between the road and the woods.

The weather did not cooperate before or during the site visit, as Schwartz describes in his report. “The day started with the weather being just cold and windy. However, before the site visit was over, I think we had experienced every kind of precipitation known to man – rain, snow, sleet and hail.”

The DARPA officials were patient and encouraging as the team spent 2-1/2 hours troubleshooting a loose pin in the cable connection to the PC. With only 30 minutes left in the visit, Team Buffalo put the ANT on the starting line, crossed their fingers and pushed the GO button.

Mark describes the moment: “We quickly moved the vehicle back to the starting line. After a brief safety orientation for all, we placed the vehicle back into Auto mode and stepped back to wait for our hard-coded time delay to kick in before the vehicle moved. Shortly after the mandatory 5-second audible alarm (horn) sounded, the vehicle gradually accelerated down the course. At first, everything looked great. But then all of a sudden, for no apparent reason, the vehicle stopped abruptly. As we watched anxiously, we could see the linear actuators on the transmission shift the vehicle into reverse. Brad and I looked at each other with stunned faces. We knew the vehicle’s onboard collision avoidance system had just kicked in, but neither of us knew why. Once the actuators stopped, the vehicle started to move again; but of course, it was going in reverse. We had hoped it would travel just a short distance in reverse. We assumed that once it cleared whatever obstacle it thought was there, it would automatically shift itself back into forward gear. Unfortunately, it continued in reverse, running over one of the orange safety cones on the left lateral boundary, and headed off toward the woods.”

Unfortunately for Team Buffalo, the remaining attempts proved to be equally disappointing. Weather conditions grew noticeably worse, with driving hail and sleet that made troubleshooting almost impossible. In the end they were unable to successfully navigate the course, but the DARPA officials were still encouraging and very interested in the vehicle and design approach. The Team was left to wait until June for a final decision from DARPA.

On June 6, DARPA released the names of the 40 teams that made the final cut, and Team Buffalo was not among them. The Team is disappointed, but hasn’t given up. They plan to continue work on the ANT, and unless one of the other teams wins the prize at this year’s contest in October, Team Buffalo will re-enter the contest in 2006.

You can follow the Team’s hard work and efforts at www.TeamBuffalo.org. Find out more about the DARPA Grand Challenge 2005 at www.darpa.mil. And finally, check out more pictures and a video of the ANT at the Automation Notebook website:
www.AutomationNotebook.com. (Search for “Team Buffalo” to see the latest entries.)

Advance your pneumatics knowledge with this free eBook. It covers a wide range of topics such as...