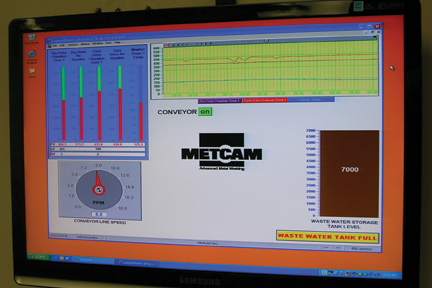 The “War Room” at Metcam, or “Production Control,” is a large central area with offices around the perimeter. The walls are scattered with white boards, schedules, literature boxes filled with the day’s routers, calendars, bulletin boards, and of course the plant SCADA monitor. The SCADA monitor is a Samsung 22″ display connected via VGA-Ethernet converters to the Automation Server running Windows XP, KEPDirect, and Lookout Direct.

Metcam has not been immune to “growing pains” throughout the years. The company has brought together some of the best talent to provide a comprehensive manufacturing solution. Like many innovative companies Metcam is continually looking for ways to improve processes. Brainstorming sessions are common; whether it’s two employees or an entire department, everyone focuses on process improvement. Problems are considered opportunities to excel; opportunities which keep Metcam out front and ahead of the competition. A few years ago, the company was presented with an excellent opportunity to substantially increase sales. In order to support this increase, it was necessary to improve many areas very quickly. Plans were developed which focused on areas where the largest returns would be recognized.

Metcam began using Automation Direct’s products some years ago. The very first product purchased was a SOLO temperature controller. The controller was purchased at a fraction of the cost of a replacement controller and worked well; later the system was decommissioned and replaced with a PLC controlled loop. Another project where AutomationDirect products were used exclusively was a level and pump control system. The system was a simple hard-wired relay control with 22mm pushbuttons and pilot lights. This system is still in use today, five years later, with zero failures. It is slated to be replaced when the washer is upgraded in 2010 when it will be controlled by a DirectLOGIC 260 PLC. The area with the most potential for improvement was the finishing department. The finishing line includes a five-stage industrial parts washer, multiple powder coating booths, and drying and curing ovens. The existing system had been in place since the company’s inception. Although it had been well maintained, it was not adequate to meet the new demands. Management decided to upgrade the system by providing additional mechanisms for improving quality, utilizing in-house resources to minimize cost. Finishing systems have many parameters which are crucial to the process. Parts must be thoroughly cleaned, dried, coated and adequately cured. In the past, these processes were controlled by discrete components. Pump and fan motors ran at full speed operated by NEMA style starters. Self-contained process controllers with built-in loops controlled temperatures. Control panel fronts were filled with 30mm pilot lights and pushbuttons. Flame safety relays were tucked away inside enclosures with no feedback to the operator. Conveyor line speed was at operator discretion with no velocity feedback.

Many ideas were discussed during the development phase. Personnel developed a wish list based upon past experience. They agreed that certain items were an absolute necessity, while others were more for convenience or “bells and whistles”. Also, scalability was an important requirement for the new system. The ability to easily integrate the finishing system with new systems added in the future was paramount. In the end, a scalable automation system was specified, allowing for continued growth and expansion.

The finishing department project involved integration of a control system with SCADA capability. The first phase required increasing the capacity of the existing cure and dry ovens. The two ovens operate independently of each other with their own heat source. Each oven is a direct fired natural gas convection type.

A C-more 15″ industrial touch screen was selected for the HMI. All functions, with the exception of power on/off and E-stop, are controlled through the C-more panel. The flexibility of C-more allowed development of maintenance screens depicting actual photos of the machine with component and switch locations, providing feedback to the operators and maintenance personnel. A switch or input status can be checked by bringing up the maintenance screen; not only is the status of the switch displayed, the operator can also determine the physical location of the switch on screen. The flexibility of the C-moresystem is tremendous and allows for continued expansion and improvement.

The final component of the first phase was a SCADA system. KEPDirect was selected as the OPC server and Lookout Direct as the SCADA client. The system was up and running within a day, reporting information back to the facilities manager’s office and the display in production control. Everyone can see at any time what is happening in the finishing department.

Affinity Energy used AutomationDirect hardware to save time and money while replacing obsolete...

Learn more about how AutomationDirect products are helping provide clean energy with hydropower...