AutomationDirect was pleased to help support two vehicles hoping to compete in the 2007 DARPA Urban Challenge. Team Mojavaton, with their “White Knight” (a modified Nissan Xterra), and Insight Racing (fielding a Lotus Elise dubbed the “Lone Wolf”) were both invited to the National Qualification Event held in Victorville, CA, at the end of October 2007. The teams were competing with 33 others for 3.5 million dollars in prize money.

The Urban Challenge was the third such event that DARPA has held since 2004 in an effort to further the technology of autonomous vehicles. Congress has charged the U.S. military with a mandate that one third of all military vehicles be driven autonomously by 2015. DARPA, the Defense Department’s R&D arm, is using the series of challenges to help spur the innovations needed to accomplish this goal. The first two “Grand Challenges” were held in a desert environment, and the vehicles were tasked with plotting a course and driving more than 130 miles across rugged terrain, but with only static obstacles. While none of the teams completed the course in 2004, several vehicles completed that task in 2005, and a team from Stanford University collected the two million dollar first place prize. The 2007 Urban Challenge upped the complexity, and the stakes. The vehicles had to be able to drive on roadways, and obey all standard traffic laws. Not only did they contend with other moving vehicles but they also plotted a course while driving through sixty miles of urban obstacles. The first prize was again $2 million dollars, with $1 million for second and $500,000 for third. 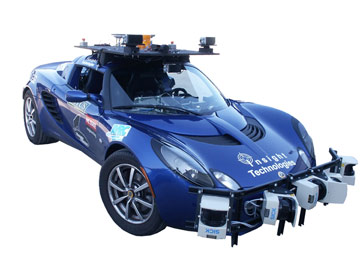 DARPA also changed the format of the challenge by splitting the teams into two separate “tracks” for the Urban Challenge. Eleven different Track A teams, all from major universities in the US, were identified early in 2006 and were awarded $1 million in “seed money” to help defray the costs of the project. The remaining 78 (Track B) teams were encouraged to participate, but were not offered any “up-front” money. Both Mojavaton and Insight racing were Track B teams.

Team Mojavaton competed previously in the 2005 Grand Challenge where the White Knight performed flawlessly, passing ten other cars (in the staggered-start format) before a broken throttle linkage stranded the Xterra on the course at the 23-mile mark. As soon as the Urban Challenge was announced, Team Mojavaton jumped at the chance to further their technology, and immediately began upgrading the onboard systems and software for the new Challenge.

Insight Racing also earned a spot in the finals of the 2005 Grand Challenge, but they didn’t attempt that course with the Lotus. They employed a more off-road capable Chevy Suburban in 2005, and they also made it 20+ miles before becoming disabled.

All the teams in the Challenge used a combination of sensors, GPS receivers, powerful computers and custom software to achieve their autonomous goal. Both Mojavaton and Insight used an AutomationDirect PLC to actuate the steering, throttle, and brakes. The PLC was also used to actuate the turn signals, and the warning claxon that all the cars are required to sound whenever they are under autonomous control.

Both teams had to prepare their vehicles for the unique challenges of the urban setting. The vehicles had to obey all traffic laws, while constantly scanning for other vehicles, stopping at stop signs and obeying the rules of precedence at intersections. They were required to pass other stationary and slow moving cars (without crossing double yellow center lines), back up, park, make U-turns and plan a new course when the main road is blocked, and even take evasive action if a collision with another vehicle is imminent. “It sort of makes a 132 mile drive on a closed course in the desert seem like a walk in the park,” commented Jim Crittenden, team leader for Team Mojavaton.

After DARPA announced the details of the Urban Challenge in May of 2006, they received applications from 86 teams wishing to participate. DARPA narrowed the field in 2007 by requiring the submission of demonstration videos in April; technical papers were due in June, and site visits by DARPA officials were conducted in July. Thirty-five teams (including both Mojavaton and Insight) were invited to the National Qualification Event (NQE) in October, where they were competing for the opportunity to participate in the Urban Challenge Final Event held on November 3. The NQE and the finals were held at the former George Air Force Base in Victorville, CA. At the NQE the vehicles were tested in three separate test areas: Area A – left turn and merge, Area B – obstacle avoidance, and Area C – precedence at intersections. DARPA provided a number of professional racecar drivers and cars to simulate traffic on the various courses. “We have developed a lot of respect for these professional SCORE drivers. Their precision and their driving skills are remarkable. We’ve wondered what kind of waiver they each had to sign to get the job of traffic driver. It must have said something like: ‘You will be driving a little Ford Taurus in close proximity to other cars that are at least twice as big as your car (or in the case of team TerraMax, 5 times as big) and those cars won’t have anyone in them. We hope they will drive well, but we just don’t know what they’re going to do. While we will ask you to honk your horn to signal an infraction, don’t expect that to do any good,’” said Crittenden.

DARPA had originally announced that 20 teams would be selected to go to the finals, but after three days of qualifications only 11 teams were selected to move on. Both Mojavaton and Insight were among the disappointed teams who were not selected. Of those eleven, seven were Track A teams, and of the 25 Track B teams in the semifinals (who received no funding from DARPA) only 4 were accepted for the finals.

In the finals, the vehicles simulated military “supply” missions by navigating a 60-mile obstacle course. The vehicles were graded on how well they could flow with traffic, heed stop signs, maneuver traffic circles and avoid accidents. The first three robots to complete the mission in less than six hours were declared the winners. University teams swept the top three spots in the finals, with Carnegie Mellon in first (two million dollars), Stanford in second (one million), and Virginia Tech in third ($500,000). Congratulations to Mojavaton, Insight, and all the teams that participated! The technology that they have developed will help the military develop the autonomous vehicles that will save lives on the battlefield and behind the frontline – and will most likely enable safe, autonomous vehicles for our roads and highways some day.

For more about the teams visit:
http://www.insightracing.org

For more information about the Challenge visit:
http://blog.wired.com/defense/urban_challenge