Theatrical automation is a newly emerging field of technology. Through the use of automation, the University Of Arizona School Of Theatre Arts is enhancing the overall theatrical experience. Students Nathan Cross and Phillip Toussaint are using various types of AutomationDirect equipment to automate scenery. According to Nathan, the use of motors and computer control gives the technical crew the ability to create highly aesthetic and creative control systems. Operating in an environment typically powered by hand, the emergence of precise and safe control allows the movement of scenery and actors in a much more accurate and efficient way. Currently in his third year in the Masters Program, Nathan states, “High power motors and hydraulic systems allow us to smoothly move great amounts of weight in ways that are pleasing to the eye without detracting attention from the focus of the show.” 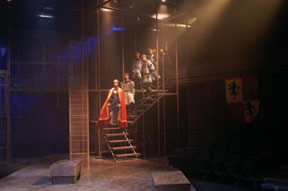 The production needed a system capable of rapidly changing scenes as the dialogue quickly transitions from location to location. In order to achieve this, professor and scenic designer Peter Beudert devised a unique system that would easily be able to present different types of terrain and environments.

The basic set consists of an array of six hydraulic lifts placed on the central acting surface. Also at center stage, a wall, or “throne wall,” rises up from the floor to a towering 16 feet at only nine inches wide. In addition to the terrain, seven telescoping metal trees and two steel doors hanging from the ceiling all move independently to various positions.

The six hydraulic lifts are operated through AutomationDirect DL205 I/O with two 8-point relay output modules that send “up” and “down” signals to the valves operating each lift. To create the scene movements, each lift is equipped with multiple limit switches allowing it to stop precisely at several positions. The limit switches are sensed by a DC input module.

The throne wall, which rises from the floor, is placed in a room beneath the theater also known as “the trap room.” The 300 pound wall is lifted by an 180V DC motor turning a 13-inch steel drum. The DC motor is driven by a Minarik driver card and controlled with an 8-point relay output module as well as two limit switches wired to the DC. The metal trees and doors which descend from the ceiling are all suspended on cables connected to curtain movers. Using limit switches in a simple four wire configuration and two 220V relays wired to a DC output module, the curtain movers are designed to pull the curtains open or closed with the push of a button. Two DL205 I/O bases with Ethernet Base Controller (H2-EBC) modules are used to control two D2-08TR relay output modules, two D2-08ND3 DC input modules and one D2-32TD2 DC output module. The first EBC system is located under the stage to control the lifts, while the other is mounted above the stage on a grid to control the remaining elements.

The two DL205 I/O bases are connected to a computer through the Ethernet base controllers. The bases are networked through a router and connect to the PC, located in the theater’s control booth, which uses Think & Do PC control software as the controller.

Electrical Engineering sophomore Phillip Toussaint focused on the Think & Do program, developing and testing for several weeks leading up to the show. The program contains arrays for positioning each tree and wall and for controlling the direction of each lift. These arrays were designed throughout the course of rehearsals. Saving these arrays in “Cues” allows the computer to move all elements to the next position with the touch of a button located on the touch screen monitor. Since there are two parts to Henry IV, separate arrays were created in the program. For each part of the show, there were 30 or more separate transitions or cues.

Check out the most current trends in industrial automation with this quick read article from...

An automated taping machine was designed and built by three graduating seniors at the University...

Here are some of the more commonly asked questions pertaining to our DL205 family of PLCs. For a...