People around the world are aware of the devastation caused by Hurricane Katrina along the coast of Louisiana, Mississippi, Alabama, and Florida. What started around the southeastern Bahamas on August 23, 2005 as Tropical Depression number 12, quickly became the fourth hurricane of the season just 48 hours later. When her catastrophic winds finally subsided, Katrina went into the record books as the deadliest hurricane in U.S. history since the Okeechobee Hurricane of 1928.

According to the National Weather Service, Katrina reached the maximum status of category five at 7am (CDT) on Sunday, August 28. By the next morning, the massive storm with maximum sustained winds of 125 mph had weakened to a category three just before making landfall near Buras-Triumph, Louisiana. But that did not lessen the impending damage.

Because the hurricane was a category five shortly before making landfall in the area of Bay St. Louis, Mississippi, the storm surge created by Katrina was the highest on record, where measurements of 34 feet were recorded. The devastating water damage, along with the wind damage, earned Hurricane Katrina the record for the costliest U.S. Atlantic hurricane of 2005. Estimates by the National Hurricane Center report $75 billion in damages. Other estimates range from $40 to $120 billion. Michael Chertoff, Homeland Security Secretary, said the destruction and consequential flooding of New Orleans makes Hurricane Katrina “probably the worst catastrophe, or set of catastrophes” in America’s history. 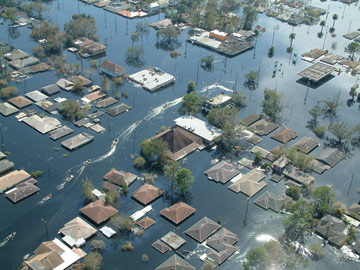 Homes, businesses, schools, and hospitals were severely damaged, if not destroyed. When the flood waters peaked, eighty percent of the city of New Orleans was under water. With so many lives lost, Katrina was named among the top five deadliest hurricanes in history. However, one victim of Hurricane Katrina, the wetlands along the Gulf coast, is not part of that statistic. In fact, it is one that most would overlook, yet quite possibly it could be the most important.

The state of Louisiana is home to forty percent of U.S. wetlands. According to scientists with the U.S. Geological Survey, satellite data shows Katrina “transformed more than 30 square miles of marsh around the upper portion of Breton Sound to open water.” That’s the equivalent of 20 to 26 percent of the 133 square mile area.

With loss of wetlands averaging between 25 and 35 square miles each year, natural protection from storms is also lost. Wetlands create a “front line” of defense by acting as a “sponge” to soak up incoming flood waters and create friction to help lower the storm surge. For every mile of wetlands crossed, the storm surge can be lowered by up to a foot. If the wetlands are not saved or returned, scientists say effects from hurricanes will only worsen.

Dredging to the Rescue

This is where technology is being put to good use. Through dredging, a process that moves sand and sediment from one point to another, wetlands can be repaired and rebuilt.

Most dredging machines work well in deep water situations, using swing anchors to move the dredge from port to starboard. The dredge is able to move short distances, but then additional equipment is required to move and reset the anchors in another location before the dredging process can begin again. In more difficult situations, such as extremely shallow conditions, operators can find themselves “stuck in the mud.”

There was a need to develop a dredge that could move freely between water and soft terrain. But where could anyone find such a machine? The answer has been found in Reserve, Louisiana. Dredging Supply Company and Wilco Marsh Buggies have developed the latest aid in coastline reconstruction, known as the amphibious dredge.

According to Bob Wetta, vice president of Dredging Supply Company, one problem was that with typical dredging machines, “to move the equipment around, you [need] a mobile crane.” Bob points out that with so many shallow areas along the coast of Louisiana, the situation might not be right for just a dredge, because it might be too shallow to actually float a boat. Operators could find themselves grounded, having to dig their own means of flotation. Sometimes, they could even run out of water, the number one requirement for dredge pump operation.

Through a joint venture, Dredging Supply Company and Wilco Marsh Buggies decided that wetlands coastal erosion was an area that needed to be addressed and developed the concept of the amphibious dredge. After almost a year of design and development, a vehicle emerged with the capability to dredge one pond and then crawl unassisted to the next pond, eliminating the need for a crane. The new vehicle is called the “Amphibian.” This self-propelled amphibious dredge is a blending of Dredging Supply Company’s swinging ladder dredge and Wilco’s track and flotation amphibious undercarriage system. Weighing in at 95,000 lbs, the Amphibian works as well in soft terrain as it does in deeper water.

Wetta explains the Amphibian is capable of walking on the bottom of a shallow area, “and as it moves into deep areas, it converts into a floating style dredge using a typical dredging method.” This versatile machine has sufficient power to pull up to 4,000 feet of 8-inch SDR Polyethylene discharge pipe behind it on the dredging site. Or, by eliminating the pipe and fitting the Amphibian with a side caster, an operator crew can deposit material locally onto a marsh area while deepening a drainage canal. This is also helpful when wetland creation projects require building access roads to the site. The side caster can be used to create and remove the access road.

The Amphibian is unique in its ability to dig in both forward and reverse directions. To accomplish that, “the ladder boom [must] be able to articulate and come back underneath the machine,” Bob says. The dredge is equipped with a swinging ladder boom with an off-center cutting width of 25 degrees port to starboard. This design provides stability for the dredge
hull while the ladder is moved from side to side.

When working in deep water, the hull of the dredge is held in place by two forward spuds (large steel poles) and one aft spud. Each of these spuds has “power down” capability. Using the spud’s winch system, the operator forces the spud into the bottom, obtaining maximum penetration and holding power. The aft spud is hydraulically manipulated. Mounted on the centerline of the dredge, this spud can pivot to move the dredge forward during the dredging process, eliminating the need for anchors. With just the push of a button, the Amphibian can move forward, back, and change directions.

The Amphibian moves freely on land and in water using Wilco’s undercarriage system. The wide chain-driven dozer style tracks are driven by two-speed hydraulic motors. With the track system, the Amphibian smoothly climbs inclines up to 60 degrees.

Through the use of a Global Positioning System (GPS), accurate depth and position of the excavator can be maintained. Separate satellite receivers are mounted on the bow and stern of the dredge. Coupled with ladder angle and depth transmitters, the satellite receivers send depth and position data when the dredge is stationary. The GPS software displays real-time data, preventing the operator from passing over material. It also permits leaving the dredging area and later returning to the exact spot. By using the Dredging Supply Company’s patented “Viscous Excavator,” contaminated sediments with high solids concentration can safely be dredged with extremely low turbidity levels, resulting in the lowest level of re-suspended solids of any form of excavation currently in use today.

With the convenience and versatility of the Amphibian, restoring the wetlands in Louisiana is becoming less complicated. It plays an important role by deepening the drainage canals, which helps reduce erosion in other areas. When it digs the canals, it can dispose of the material in an area that needs to be filled. Since the material is fairly fertile, more vegetation can grow and replenish the wetlands. Although there is currently only one Amphibian in use for the Katrina clean-up, there is much interest in models ranging from 6 to 16 inch pump sizes.

We have all heard the saying, “Don’t dredge up the past.” Thanks to the people at Dredging Supply Company and Wilco Marsh Buggies, we can now say, “We’re dredging up the…FUTURE.”