Sam Flournoy first contacted Automation Direct in February of 2009. As a 14-year old who had just finished building a biodiesel processor in his garage, he now wanted to automate the process. We immediately began looking around for the candid camera! But it turns out he was serious, as he was producing about 180 gallons of biodiesel per week; he had already purchased a DL06 PLC to use as his automation controller.

Sam explained, “At that point my processor was much easier to use than most other homemade systems, but it was still very time consuming. Right from the start, I knew I would have to automate the processor because high school was going to take up most of my time.”

He also had an eager customer for all that fuel – Sam’s father operates a tree service in Richmond, Virginia, with numerous diesel trucks thirsty for Sam’s product. Sam further explained that he became interested in biodiesel after his father purchased a diesel VW wagon from a farmer who was making biodiesel in a shed – with very crude tools and methods: ‘two rusty water heaters, a cheap pump, and a pair of jeans to use as filters.’ Sam wasn’t impressed by the setup, but was intrigued by the concept. He says, “In early 2008 I knew literally nothing about biodiesel. I spent hundreds of hours researching biodiesel over the course of about four months. I had never been so motivated to learn about something new. I started out with zero knowledge, and within a few weeks I could walk you through a titration test, or tell you all of the pros and cons of biodiesel. And I was having so much fun just learning about the whole process, knowing that in the end it would be helping my family, the environment, and me.”

Sam spent the next eight months scrounging stainless steel tanks, valves, fittings and various other parts from junkyards and closed factories, and cajoling his father’s welder to help him weld up the frame.

He designed the plumbing and electrical systems from scratch. He admits, “I never had any electrical experience before in my life, so this went pretty slow in the beginning.”

He produced the first batch – 20 gallons – in late 2008, and tested it in an old ‘retired’ diesel engine. He reports, “It ran beautifully, and the exhaust even smelled a bit like French fries. I can’t imagine a first trial run being more successful.”

Sam began running larger batches and refining his process. “I had a machine that could produce a valuable product that was also better for the environment. But it was still a lot of work. I had to constantly move around the machine – turning valves manually, turning the pumps on and off manually, and monitoring the whole process.”

The next logical step was to automate the process, so Sam contacted AutomationDirect and purchased his first PLC. “The automation of the biodiesel processor was the hardest part of the entire project, but I enjoyed every step because I was always learning something completely new, and it was really cool! It is very rewarding to watch the machine do something automatically that I had previously done by hand.” 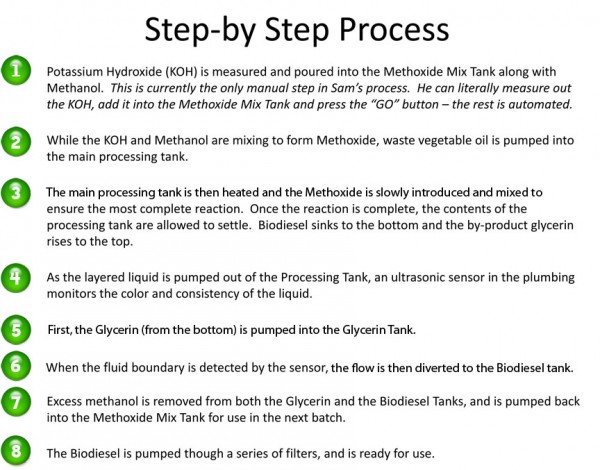 Because he was unfamiliar with PLCs, Sam developed a specification outline and hired a PLC programmer via a freelance programming Web site. When the programmer drug his heels, Sam started dabbling with DirectSOFT programming software. He quickly learned more about programming a biodiesel process than the (presumably adult) contractor, so Sam let the programmer go. “I am very happy that the programmer did not complete his job. This forced me to learn how to do it myself. I could not have fully automated the machine without knowing how to write the code for the PLC,” explains Sam. Sam came back to AutomationDirect for a temperature sensor, temperature controller, solid-state relays, ultrasonic sensor, transformer, and even an 8-inch C-more HMI for his control enclosure. He added automation step by step, while continuing to perform many operations manually. When he finished, the machine was producing batches of biodiesel completely autonomously. Sam continued to refine his process, and reduced the batch time from six to four hours. Before long he was producing over 1,000 refined gallons a week with the fully automated processor.

Sam’s journey was not without pitfalls. He reports one scary incident, where he noticed a clog in his mixing tank causing pressure to build up in some of the PVC piping. Before Sam could shut down the processor, the pipe cracked, sending a highly caustic (and flammable) mixture of potassium hydroxide and methanol spraying in all directions. To make matters worse, the E-stop button was located just beyond the broken pipe which was spewing the chemicals. He dashed through the spray to hit the button.

Fortunately, Sam always wears full protective gear including a gas mask and full apron – and he suffered only a minor injury to his ear. Sam immediately set to work repairing the processor with a newfound respect for the potential danger, declaring “I take all safety precautions even more seriously than before”. He added an emergency “OFF” button 50 feet from the processor, installed pressure relief valves that open if there is an over-pressure situation, beefed up the plumbing, and added shields over the plumbing in several critical places. Sam has always thought he might build biodiesel processors for sale as turnkey products. He was ready to begin building a second system and wanted to incorporate the many improvements that could be afforded by a ‘clean start’. He listed his existing biodiesel processor on eBay – mostly on a lark. Imagine his surprise a month later when he was offered $40,000 for his prototype!

Sam feels that automation is a key selling point of his design. “Many other processors on the market claim to produce fabulous amounts of biodiesel per day. The truth is, unless you want to be attending the system all night, every night, you must have a fully automated processer.” In addition to the fully automated operation of his processor, Sam points out several other features that set his design above other machines on the market.

1.) All stainless steel components: other units use brass, steel, and PVC for plumbing. Brass will cause high acidity in biodiesel; steel will rust, which can ruin pumps and other components. PVC is very weak compared with stainless and does not tolerate heat. Along with the pipes, all of the tanks, pumps, valves, and other components in contact with the biodiesel are stain less steel. “Stainless is very resistant to strong chemicals, very strong, and it looks great” explains Sam.

2.) No threaded pipes: most other processors use pipes and fittings with pipe threads. Pipe threads rely on thread sealant to keep the pipe joints from leaking. Biodiesel, Methoxide, and even waste vegetable oil will ‘eat’ the thread sealants. “They might work at first, but over time, you will have a leaky mess. My processor uses stainless steel pipe that is welded to flanges, eliminating the need for thread sealants” Sam continues. The flanges incorporate a gasket that is extremely resistant to chemicals and heat. Flanges also make it very easy to remove a component from the machine for maintenance.

3.) Overlapping batches: due to the additional tanks he incorporates, Sam’s processor can start a second batch while the last filtering step is underway. This reduces the subsequent batch time by up to two hours.

4.) The C-more touch panel inter-face makes the machine very easy to use. The panel will alert the operator if the PLC detects a problem with the process. There are even graphical screens to walk the operator through scheduled maintenance procedures and trouble shooting.

7.) Mobile unit: This processor is built on wheels so it is very easy to move it around.

8.) Safety: “I have learned firsthand that safety is the most important component. This machine has been designed to ensure that it can do its job as safely as possible,” assures Sam. The unit has many safety relief valves, shields, and two emergency stop buttons – one on the machine and another away from it. The PLC also monitors the process to ensure everything is running smoothly. If something is not operating correctly, the PLC safely pauses the process, notifies the operator of the problem, and suggests corrective action in many cases.

Sam recently flew to Los Angeles, CA, to commission the prototype machine for his first paying customer. Sam has now designed version 2.0 of the Flournoy Green Tech Processor. He is currently building a “showroom model” of this new version, and he is accepting preorders at his Web site: http://www.flournoygreentech.com

Here are links to several of his YouTube videos:

Part 1 (prior to automation):
http://www.youtube.com/watch?v=6RyG5Kt_xbQ

Part 2 (prior to automation):
http://www.youtube.com/watch?v=pmeLn6Buc3YNews

Biodiesel is a liquid which varies in color — between golden and dark brown — depending on the production feedstock.

Blends of 20 percent biodiesel with 80 percent petroleum diesel can generally be used in unmodified diesel engines. Biodiesel can also be used in its pure form (B100), but may require certain engine modifications to avoid maintenance and performance problems.

Biodiesel has different solvent properties than petrodiesel, and will degrade natural rubber gaskets and hoses (mostly in vehicles manufactured before 1992). These parts can be replaced with fluoroelastomer versions which are nonreactive to biodiesel.

Biodiesel has been known to break down deposits of residue in the fuel lines where petrodiesel has been used. Therefore, it is recommended to change the fuel filters on engines and heaters shortly after switching to a biodiesel blend.

Biodiesel has better lubricating properties and higher combustion quality than petro-diesel. Biodiesel blends can reduces fuel system wear, and can increase the life of some fuel injection equipment.

The calorific value of biodiesel is roughly 9% lower than regular Number 2 petrodiesel. Variations in biodiesel energy density are more dependent on the feedstock used than the production process.

Biodiesel has virtually no sulfur content, and it is often used as an additive to Ultra-Low Sulfur Diesel (ULSD) fuel.