I am a member of a small alternative energy group in Ohio. Many of us generate our own power using wind turbines. These wind turbines vary widely from low power to high power and from homemade to high-tech. Among all of this diversity, we had one common problem – we were looking for a new solution to replacing our aging analog wind turbine controls. Not only were the old controls becoming a reliability issue, but replacement parts were becoming more difficult to get, and they were also more expensive. To compound these issues, the local power company had also informed us of impending tighter restrictions regarding safety systems and power distortion (THD) control that our simple analog control systems could not handle for our induction generators.

It became apparent that we had to find a system that could be easily customized to work with a variety of wind turbines and control schemes. With a large investment already made in the turbines and towers, we had to find an upgrade path that was affordable. This seemed simple enough, or so we thought.

After several months of research, we noticed a definite pattern. Available control systems were either way too expensive for the average person, or were proprietary and purpose-built for a specific wind turbine. There was nothing available that met the needs of our installations and budget, let alone a solution that could be adapted to various setups. We began to feel that searching for a new control system was a lost cause.

Then, I ran across the AutomationDirect Web site while looking for a new supplier for some relays that we used in our control system. The DirectLOGIC® PLCs and the C-more Micro panels really caught my eye. Could components this inexpensive really be used to design a replacement control system? I did some research online and I was very impressed with the many rave reviews I found regarding AutomationDirect and their great support. After bringing my findings to some of the others in our group, I was met with a lot of skepticism, but I got their backing to engineer our own control system, and use these affordable components that I had just found from AutomationDirect.

The next problem was finding someone with PLC experience to help us design our new system. Hiring a PLC programmer sounded like a great idea until we got some price quotes. After a few more dead ends, I finally decided I would learn to program in relay ladder logic (RLL) and attempt to design the control program myself. Having done minor computer programming in the past, I felt confident I could give it a try. 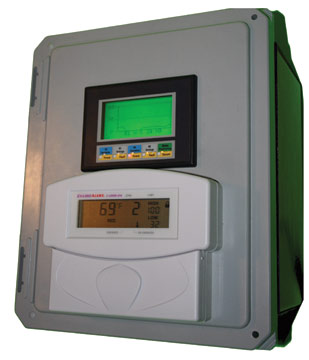 I placed an order and purchased enough components to make four complete units. I chose the DirectLOGIC D0-05DR PLC and the 3” C-more Micro panel as the main components. Since we also needed new instruments to measure alternator RPM and wind speed, I ordered HO-CTRIO high speed counter cards and found some suitable pulsing instruments. In fact, every component we used, except for a couple of sensors, was ordered from AutomationDirect.

While the DL05 and the C-more Micro together were the most expensive components, the combined cost was still much less than some of the individual modules in the old control system.

Maintenance and repair time regarding the PLC also had many advantages. For example, if the new control system became damaged from a lightning strike, it would be easier and less expensive to replace a $99 PLC than to replace several modules priced anywhere from $300-$500 each with the old system. Everything about this approach made a lot of sense.

I took a few weeks to read through the manuals and study up on RLL programming andDirectLOGIC’s RLL Plus. I found the RLL Plus stage concept so easy to understand and the manual so well written, that I drew out the state logic to the entire control program immediately after reading the chapter that very day. I became very interested in PLC programming at that point and joined AutomationDirect’s online technical forums. I was pleasantly surprised with how welcoming and helpful the community there was. It allowed to me ask questions, get answers and share my experiences very easily.

Over the next couple of weeks, I worked on turning my state transition diagrams into RLL code. I am still amazed at how easy it was. Even when I was stumped, the online community was right there to help. Early on in the programming process, I realized that I had a lot of unused inputs and outputs, so I switched strategies and became determined to make each of our PLC-based control systems control two wind turbines. If this worked, it would cut costs per wind turbine in half for many installations.

After about three weeks, I had a very workable prototype. Keep in mind that I had never even seen or heard of RLL just a month prior to this! I took some time to do some bench-top testing. In my case, bench-top testing actually took place on my kitchen table. I don’t have a development lab – I am just an average guy that took an opportunity to try something new. After a week or so of testing everything I could think of, I took some time to find bottlenecks in the code, clean up the user interface, and add some “bells and whistles,” such as trending, test screens, and engineering screens that we couldn’t even find in the most expensive control systems we had priced earlier. Just a couple of short months after starting the project, we were installing the first unit on a pair of 40 KW wind turbines. Representatives from the electric company were there to run their battery of tests. We were all blown away when our new unit outperformed all of our old control systems by an enormous margin, and even met all requirements of the stricter regulations that were going to be instated in the future. The total cost of the new units came out to be less than half of the cost of our older analog controls, and it performed much better. Before we knew it, we had a total of seven wind turbines running off of the four original prototype units. There is still a lot of talk about how much better and more efficiently these new units perform!

Recently I was approached by a company that builds and installs wind turbines. They explained that they had been looking for just this sort of control system for their business. Shortly thereafter, I signed a contract with them; our creation, the “Winddaddy 213” will be used on all of their new installs, and they will offer it as an upgrade to their existing customers. This encompasses over 70 wind turbines! Their first orders have already been placed and units delivered. They are also talking about sponsoring me to design an upgraded version that will control even more turbines simultaneously and offer even more advanced features.

Looking back at this experience and looking at the finished product, I am still amazed at how this all unfolded. What started out as a basic need for us, turned into something much bigger. I now have a control system I understand fully. I can make changes and improvements as needed. I feel empowered that we don’t have to wait on a supplier or manufacturer when we need parts. We know how it operates and we know how to fix things should something go wrong. I would encourage anyone facing a similar situation to take the same road we did. We have gained so much from this experience and still can’t find a single negative to our decision.